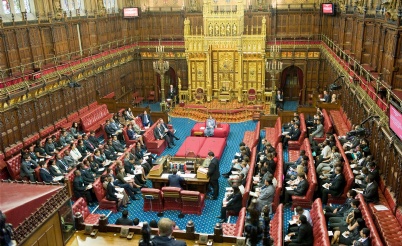 An Enrichment Virtual interview was arranged by Mr Potts with Baroness Harris of Richmond. Mr Wallace acted as a superb host, and thanks go especially to Miss Sarre who co-ordinated the 6th Form on the day. Student comments are listed below:

"Baroness Harris of Richmond gave such an insightful demonstration on the role of the House of Lords in legislation and furthered my knowledge on the secondary chamber. From the hybrid committee- members of the House of Lords as well an MP of a committee being worked with on a virtual call as well as a handful of members in the house- to how she voted on legislation. She gave clear answers to questions from me and my peers including answering questions that did not have to be asked. Her opinion was incredibly clear on some [questions] as she was asked on the government’s handling of the coronavirus pandemic, calling it shambles’. She also had an insightful point of view that as a woman, she was not held back due to her gender. As a female myself, she gave me further inspiration on becoming involved in politics and working that little bit harder to get to the top is worth it. She has a very modern approach, which I liked, to issues of having a much more diverse chamber and wanting to reform the House of Lords to become democratic. I thoroughly enjoyed this virtual chat and will never forget the experience and how easy it was to engage with the Baroness."

"Baroness Harris of Richmond did a live talk about the House of Lords and her views on the current hot topics in politics including her views on Boris Johnson and her opinions on the lack of people within the BAME community in politics. She was incredibly insightful into what actually happens at the House of Lords and she gave us a lot of information as to what she had accomplished in her many years in the police force. She was quick to say that although the media has been speaking of giving every policeman and policewoman weapons to defend themselves and help catch those who are doing wrong, she did not think that the idea was good. She said that “violence was never the answer” and that the police force doesn’t need such blunt ways to help capture those who do wrong. It was very interesting to hear her views on Boris Johnson and it was funny to hear that she thought What Boris is doing is completely Shambles! Overall, it was a very useful and fun experience and we learnt so much about what the House of Lords does and Baroness Harris’ opinions and political views. I really enjoyed listening to her story and I’m sure it has inspired many of us to think more about politics and what our political views are."