The Best of Barnhill Values 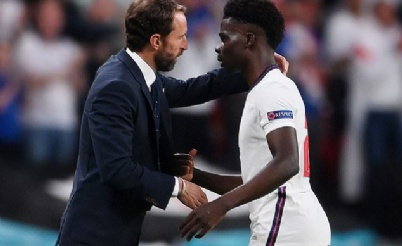 I was genuinely emotional when my tutees were devastated that 'we' had lost in the final. So in that respect football did come home, because for the first time (certainly in my mind, anyway) we have an inclusive and hugely likeable team that represents us all and does so much to do what’s right and fight injustice. I remember 5 years ago asking a Year 9 class if they were supporting England (Sturridge winner against Wales, for those that remember!) and only 3 in the class put their hand up. Last week, it was almost a full house.

A vast number of the Barnhill community watched the Euros Final where a few of our players missed penalties, including local Greenford lad Bukayo Saka (only 19 years old!). It's the first England team that I have loved watching, and a lot of that is down to the fact that the players are such wonderful role models, on and off the pitch. So it saddened me more than anything that Saka received such abuse, much of it racist, in the days following the final.

This year all students have been studying Citizenship, and Saka is both a local and national success story. That you can come from anything, be any colour/ethnicity and both belong and play for your country. I can't imagine the pain he must be feeling - missing a penalty and having to endure the vile abuse, but in the same way that the response to the Rashford mural vandalism in Manchester was covering it in messages of support and love, I thought it would be amazing if racially-abused and hurting 19-year-old Saka could be sent well-wishes by our students.

The response from our students (and some teachers!) has been overwhelming. Below are a few highlights but do have a look at the full list of letters. It goes to show that love will always win, and Saka, with the rest of this wonderful bunch of England players will bounce back and do us ALL proud again.

This team is my England. The students’ England. Our England.

Highlights from the letters written by students to Bukayo Saka:

You’ve done the whole nation so proud out there on the pitch throughout the whole of the Euros only at 19 years old you are such an inspiration to a lot of people including me. As a child I used to play football I used to be on and off with it but I've started to be inspired by it again. Haters are going to hate but just so you know you have all your real supporters out here in the world from all different countries.

You should never feel sorry for the person you are. Every day you get critique on your performance and skills from people all over the world. That is how football works. However, never allow yourself to apologise nor feel remorse for the skin you are in. The cosmic strength within you is beyond my belief. The body you are in is beautiful, always remember you are made to live for yourself not for other people and don’t allow these people to get inside of you and rot the sweetness, determination and self-belief out of you.

We come from the same area. I go to a school just around the corner from where you went, Barnhill Community High School. Hearing someone that has come from the same community as me and come so far in their life makes me believe. It allows me to believe in myself that I can be strong and keep going. That I can make it to a place I have always wanted to be, my dream life ahead of me.

I just wanted to say how extremely proud we all are of you! I can't imagine how much pressure was put on you during the Euros. Our Greenford boy has done everyone proud and showed that it doesn't matter how old you are or where you come from, we can all achieve anything if we really believe in ourselves.

I could not even imagine the trauma you must have to face when stepping foot onto the pitch not only in front of the Wembley fans but also everyone around the world. It takes a lot of courage and will power to do so and not many people could do what you have done, so it says a lot!

To all of us here at Barnhill you’re still a star and we still see you as a real role model to us no matter what has happened! I really hope you’re okay and I look forward to see you continuously smash all of your upcoming matches in the future!! We love you Saka. Keep your head held high and keep doing us all proud.

It is absolutely disgusting that the people sending harmful comments your way are those who wouldn’t even have the courage to step on that pitch and do the incredible job you did. I know you will come back 100 times stronger and millions of people are on your side.

Everyone leaving hateful messages isn’t a true supporter and their words shouldn’t mean anything to you. We win some and we lose some, and this just happened to be a loss. You’re not to blame. You’re a team for a reason and you support each other no matter the outcome of the match.

There are millions and millions of us all behind you, influenced by your determination to conquer every obstacle that is brought in front of you, and we all will help support you through them.

I hope you are feeling proud with everything you have achieved at such a young age as it really has impacted me as an individual and many others around me. You are enough. You are powerful. We are beside you. Don't forget that!!

I’m writing to let you know to not stop. Don’t stop at all. Don’t stop playing the sport of your dreams. Don’t stop working towards your goal. Don’t stop being the Saka everyone knows. Just look how far you have come. You showed millions of people that any local boy can become an amazing football player.

Well done for getting so far at such a young age. You were under a lot of pressure during the penalties and mistakes happen. I can’t imagine the amount of hate you’ve received, but we want to give you lots of love and support from your true supporters. You’re a role model for many young people and I hope you become really successful in the future