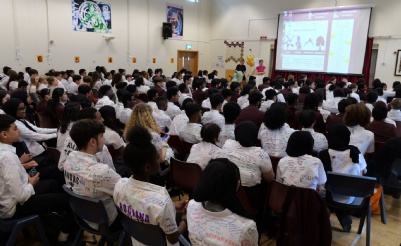 The Y11 students put their pens down on the last exam and picked up their marker pens for a frenzy of shirt signing before meeting for a final assembly lead by Ms Monteiro.

Mr Jones, Headteacher, and Ms Hemming, CEO of the Trust, spoke of their learning journey not just academically, but in character as well as wisdom.

There was much cheering and laughter as portraits of the students were scrolled across the projector screen and there was much hilarity at the TikTok video containing a compilation of pieces from teachers, pastoral team and even the senior leadership team.  Then it was everyone outside to release balloons as a symbol of freedom and reaching for new heights.

We wish our Y11's the best and longest summer before they embark on the next chapter.

Fingers crossed for some great results in August and a measure of the efforts made over the last two years.