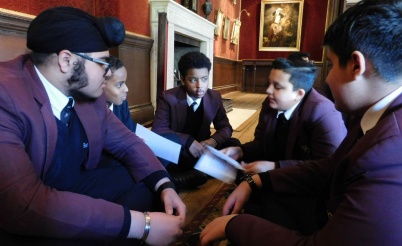 With staff actors with two hands-on, expert-led workshops, (a) students explored the emergence of the abolition movement of the 18th-century; and the lives of the Mansfield family during interactive sessions.

"On Tuesday 28th, we visited Kenwood house , which previously belonged to William Murry also known as Lord Mansfield . Our class learnt a lot about him and his involvement in the Abolitionist campaign. He was born and raised in Scotland but when he was 13 he rode a horse to London to study law at Westminster school. He was involved in the Abolitionist campaign because one case came to him from the Abolitionists , where an enslaved man , called 'Somerset' was being forced to go back to the Caribbean to go and work because his master didn’t want him anymore. When the case was brought to him many of his friends wanted Somerset to go back to the Caribbean because this could lead to more problems like more slaves wanting to stay in the Country. Mansfield`s final decision was that Somerset could stay and the law was that if someone was brought to England they could not be forced out of the Country. In total the trip was very educational and we gained a lot of knowledge it was a nice and enjoyable trip"

"We were greeted at the door the door by two fantastic guides who made us comfortable and welcome. We first entered the entrance hall which was once used as one of the two dining rooms  renovated by Robert Adam in 1764. We then glanced at the William Murray (Lord Mansfield) library which had extraordinary architecture. We were taken to the dining room and were told the Mansfield’s had 24 courses at dinners and some visitors had to bring their own silver cutlery. We were shown a lot of little fun workshops during this exquisite day out to Kenwood House. Encourage people to go visit Kenwood house as it was a very educational experience."

"As a treat for all our hard work, Mr Potts arranged a trip for my class and I on Thursday the 28th of January to Kenwood House, previously owned by William Murray. He was born and raised in Scotland and when he was about 13 he rode a horse to London, where he attended Oxford university where he studied law. After William Murray became a lawyer he was officially known as Lord Mansfield. He had an amazing home with many different designs that represented the story of Hercules. We saw different paintings of this man and his library was immaculate. There were old books from his time, hundreds, even thousands on the outside of the library. It was furnished with comfortable chairs to relax on while he read. We moved on to the dining room where the nice workers told us more about what the people that lived there used to eat. I also learned the fact that silver was was very expensive so if guests were coming over they would have to bring their own. Then then took a break and went to the old kitchen for lunch where we were greeted with a foul odour! Some of us went outside where it was very lovely and I guess the birds thought so too! As a whole, the trip was an amazing experience for me to learn about the history of the house and an amazing ex-lawyer, Lord Mansfield."