Enrichment Visit to the British Museum 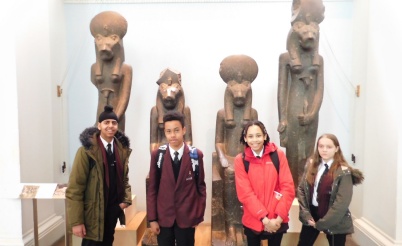 A group of Year 9s were taken to investigate the treasures of the British Museum. From the Mummy of Katebet to Samurai Armour; and from the Elgin Marbles to the Rosetta Stone students described the day as a real adventure.

"The trip to the British museum was a fun and enjoyable trip. We took a train and a bus to get there. It was definitely worth the journey, as we learnt a lot of things and had loads of fun in such a big museum. We went everywhere in the museum and every turn we took there was something very interesting there which was a very fun experience. My favourite place was the scary Egyptian Mummies and the history of money, where we got to see lots of old money that isn’t used anymore. I was sad to leave at the end because there was so much more to see."